Introduction:
Encircled by the lush green vegetation, this straw thatch complex of houses with only their golden roofs visible from a distance seem like they are almost touching the earth, blending with it rather than standing out. This home belongs to Raman Cheruvayal, a traditional paddy farmer who collects indigenous seeds, setting an example for all the farmers to be in touch with their roots as the only solution to the existing farmer crisis in Wayanad.
The relation between the house and the participation of the family is starkly evident in this house, which needs a gentle touch of care of the members it inhabits. The raw materials used in making this house are entirely locally sourced and from the farm produce.
The overall complex of three buildings consists of two main houses on the upper level, and a shed on the lower level. From the level of the road, this entire system sits in an excavated portion which was once was a sloped land. The steps that lead you down are also made by compacting mud. The stepped excavated portion creates amazing seating spaces dotted by trees that provide shaded enclosures.

The main structure:
This house is a more than 150 years old made with cob and adobe walls with a timber and bamboo double roof structure.

Foundation & plinth: Foundation of this house is an earthen one in which the mud is pressed to just compress it enough till it reaches the plinth. The foundation is 1 m deep and little thicker than the walls. The veranda runs throughout the periphery of the house, and has a shallow foundation of mud built in a similar way.

Walls: These 1’ thick load bearing walls are made of cob using locally available soil, mixed with a paste made with the bark of Kulamavu (Persea macrantha) and rice husk. Kulamavu is a binder, which has antibacterial properties and makes the mix sticky, and rice husk acts as fibre for providing tensile strength to cob.

The wood used for the beams are wild variety of arecanut, and palm trees. The wood is treated in water by keeping them just below the surface of the water for three to four months. It is also the traditional method of cutting the timber that is responsible for its longevity.

The bamboos used for this structure are kallumula and odamula. The harvesting of the bamboos is done 10 days after the full moon day when the pest activity is the minimal because of low sap content. Our ancestors have used this knowledge for building and this is the reason why the moon is extremely important when building a natural building. Another technique that is used here for treating the bamboos that ensures that they lasts for around 150 years is the smoking pit located inside the house centrally, to smoke the bamboos. The long bamboos are cut into three parts and used according to their thickness. The bottom thickest portion is used as columns, the middle part is used as rafters and the thinnest top portion is used for the purlins.

From the acceptance speech of Cheruvayal Raman of the Kurichya Adivasi Tribe (Kerala) who received the P.V.Thampi Endowment Award for Environmental Protection in Kochi, India on the 9th November:

“I dropped out of school at first grade to do agriculture. I have seen people coming to Wayanad, where I live, in search of antique items and antique furniture. I asked them why they want to collect these things. They said they are doing this to preserve the old culture. Hearing this, I decided to collect paddy seed that is disappearing from cultivation and started cultivating this each year on my five acre plot. Now I have thirty-five varieties. I give 2kg free paddy seeds to anyone who asks me. I do not take any money but insist that they give me back 2kg of seeds after their cultivation. Thus, I know for sure that they cultivate the seeds I give them and a chain is created. For me that is the type of preservation of culture I can do.”- Translated by Dr C J John Chennakkattu , With thanks to Meena Menon

Attic:  The attic is made by closely and irregularly spaced bamboos resting directly on the wall. A woven Eeta (bamboo reed) mat is placed on top of the bamboos. This is done to prevent the dust of the thatch from falling into the room; this also acts as a storage space, making maximum usage of the height in between.

There were four wooden rafters of which two rafters were tied with the help of a beam, which rests on the main beam, placed on the longer walls. On top of this assembly, the bamboo rafters radiate out to create the skeleton of the roof, resting on the beams of the wall and extending to the beams of the veranda. These members are connected by a wooden ridge, which holds them all together. The next layer is that of the split bamboo purlins spaced very closely in groups of two, and at intervals having a vertical split bamboo to keep the purlins connected. The thatch used for roofing is rice straw, made in bunches, the starting of the thatch is from the bottom where each layer is laid and spread, then the next layer comes on top of it having a sufficient overlap. Every year after the harvest, another layer of thatch is added on top of this first layer. And the year after that, the entire thatch is replaced with a new layer of thatch. So every two years the thatch is completely replaced. The thatch that is replaced is used for mulching, and nothing ever goes to waste. This gentle building is unified peacefully with the earth throughout its life span, even after it disintegrates.

The thatching is in synchronization with the harvesting, so that all the farming and building processes are in harmony with each other. The slope of the roof is very steep since Wayanad receives heavy rains.

Roof of the Kitchen structure:

The wooden columns are placed distinct form the adobe wall. The 25 cm thick adobe walls are non-load bearing and the interior set of columns take the load of the attic while the columns of the veranda take care of the load from the sloped roof. The main roof rests on the beams that join in the veranda, which are supported by the wooden columns. The bamboo rafters are connected to this beam running around the periphery of the house. On the secondary beams inside the house, there are two columns that join the ridge to form a stable structure to support the main roof.  The layers of the roof for the kitchen are as shown in the sketch.

Finishes: The wall when dry, it is coated with a plaster made with river sand, mud and shell lime. The hand designed patterns on the walls and the floors add to the beauty of the house carrying the individuality of the person who touches it. You can learn more about the plasters used in this home in our speaking natural finishes series.

Here, the idea of home as just an inhabitable space changes, bringing back the sense of community building. Permanence becomes dull in a natural building, which is breathing and alive like the souls it continues to nurture living within it.

There are very few who realise the importance of these houses they live in and we are in search of the Raman Cheriyans’ of India to cherish and celebrate our traditional houses that are keeping our heritage alive. 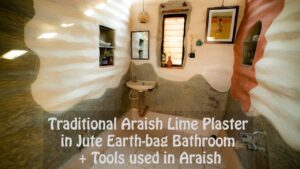